“Everybody can be great … because
anybody can serve …  you only need a
heart full of grace and a soul
generated by love.”

Away for a week

I'll be driving south tomorrow to stay with Rachel and the girls - it's their Easter holiday from school. I'll call in at The Buddhist House on the way down, to pick up copies of the new "Running Tide". Although they are on retreat I can call in without disturbing them. Then off further south. On Tuesday evening I'm going to London to see Simon and to meet Steve, whom I only know through his blog, for the first time.

Stir not ardent passion nor attachment

When you observe your mind with penetration,
Stir not ardent passion nor attachment
Lest the devil of desire possess you.
Son, rest at ease and without hope.

Shame about the neighours

Yesterday we went up the coast for a day out - as the forecast deteriorates for the rest of the weekend. Coffee in Warkworth, underneath the shadow of one magnificent castle, and lunch in Bamburgh, in sight of another. 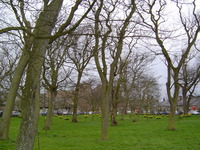 As we walked through the village, these rooks were making a tremendous din. Through the trees, you can see the castle.

There are four bases of sympathy:
charity, kind speech, doing a good turn,
and treating all alike.

Here are my lovely new shoes - 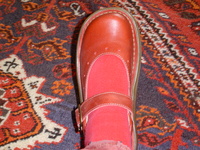 Well, oops - actually, as you've guessed, one of them. This morning I went to the Metro Centre, along with a great number of other people (good test of one's equanimity). In a roundabout way, this was on behalf of my son, whom I'll see in London on Tuesday. I must love him.

And I spied these Dr Martens Mary Janes. Just right for a red person. And practical. I do comfort, not glam.

Terry  has posted on Robert Thurman's views on Buddhism without Buddhism. I can see the value in this, for people who wouldn't be interested in Buddhism per se, who need some support re stress or pain relief or who have another faith (and we're not in the conversion business, as Buddhists).

I do run 'Meditation for Relaxation' sessions for University staff. However those who come seem to want to talk about meditation as part of Buddhism anyway, rather than divorced from it. And I'm more than happy about that. Though I wouldn't want to put off anyone who didn't. I do, by the way, run fully Pureland Buddhist sessions as well.

For me, personally, I agree with Terry, who says

I don't think "Buddhist methods without the Buddhism"
is such a useful idea (for me, anyway).

I was previously part of a (non-Buddhist) group that had taken meditation out of its spiritual context and, over the years, the organisation became more materialistic and less spiritual. Which suited many.......... and you can see where it lead me.

Fearlessness is extending ourselves beyond a
limited view. In the Heart Sutra, [one of the
Buddha's talks to his disciples,] it talks about
going beyond. Gone beyond, or ga-te in
Sanskrit, is the basic NO.