wonderful drawing ebook offer for the next 22 hours

The lovely Michael Nobbs is offering his charming 'Beany 4' as an ebook and, as an introductory offer, it's at the bargain price of $1:00 until 6 pm GMT Tuesday 1st June

celibacy or relationship: a current issue in the amida community

Dharmavidya writes:
Here in Amida we practise Pureland Buddhism, which could be said to be Buddhism with a human (sometimes very human) face. It is Buddhism for ordinary people. In Japan the vast majority of Pureland priests are married. They conduct the religious life of the community in a similar manner to Protestant clergy in the West. By contrast, Buddhism in the West has developed around the monastic lifestyle and has a rather puritan ideal. Many Western people seem to feel more at home with that kind of austerity even when it is practised by denominations that also practise sexual discrimination, authoritarian organisation and ethnic bias. In Amida we are not so austere. We have both a celibate and a non-celibate track. We revere as founder both Honen Shonin, who was celibate, and Shinran Shonin who was not. To paraphrase Honen, our attitude is that if being in a relationship would impede your practice of nembutsu, then be celibate; if being celibate would impede your practice, then enter a relationship.

Continue reading "celibacy or relationship: a current issue in the amida community" »

many faiths, one truth...the dalai lama

By Tenzin Gyatso
WHEN I was a boy in Tibet, I felt that my own Buddhist religion must be the best — and that other faiths were somehow inferior. Now I see how naïve I was, and how dangerous the extremes of religious intolerance can be today.

buddhism has made a difference to jonny wilkinson

Jonny Wilkinson: 'I had to be perfect in everyone's eyes. It was so tiring'

He battled for the World Cup – and won. He suffered terrible injuries – and overcame them. But Jonny Wilkinson's toughest fight has been with his own mind 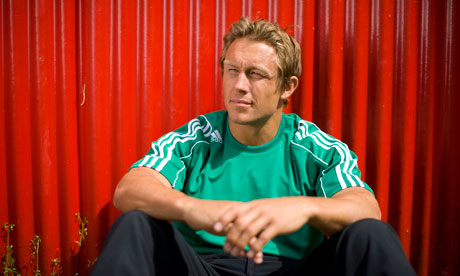 It's surprisingly difficult to interview someone who has a black eye and gashes on his nose and neck, especially when you're sitting two feet away from him on a sofa. Jonny Wilkinson, England rugby legend, hasn't been in a fight on the way to the Rosslyn Park rugby ground (we meet in a messy backroom full of balls he has to sign for some unspecified promotional purpose). He got knocked about the night before playing for his new French club Toulon against Connacht, has flown from Ireland to London to spend a day coaching competition winners for his sponsor Volvic, and is heading back to Nice this evening.

We are not going to get long together, which is frustrating because Wilkinson – England's starriest rugby player in the past decade, but also one of its most injury-prone – is just about the most cerebral, intense, self-questioning sportsman I've ever met; as complex as the choreography of his famous place-kicking routine. He looks like a Californian surfer, and there are times when he talks like one too, trying to explain his philosophy of sport and life.

I had intended a softish opening – "You must be knackered after last night's match" – but immediately, in his gentle, earnest, slightly nasal voice, he is telling me why he could never be a rugby commentator in a sporting afterlife that is now not far away. "I'd be the commentator that TV stations would want rid of straightaway – I would be so non-committal with regard to players' performances."

When I ask him to explain why, the Californian surfer-thinker (he dabbles in Buddhism and reads lots of pop philosophy) starts to emerge. "My view of perfection, which was once totally outcome-based, got me into so much trouble," he says. "I spent so much time trying to influence things that couldn't be changed. But now I've retracted it one step into intention, and that's given me the peace of mind to know I'm doing all I can do. And I am comfortable with that view of what it means to be a perfectionist."

Continue reading "buddhism has made a difference to jonny wilkinson" »

"Well, does anything mean anything anyway?" Nowadays one gets asked all sorts of questions that betray a cynical or nihilistic attitude. Although this seems to be particularly characteristic of the modern age which many people associate with non-belief, relativism, reductionism and secularism, it is clear that two and a half millennia ago Shakyamuni met with many similar sentiments. People have always been concerned about the meaning of life. Why does anything exist? Why are we alive? What is life, anyway? These questions, if taken in a practical way (i.e. what does this mean for my life?) are the beginning of spirituality. Their solution cannot be accomplished by rationality alone. They require a leap of faith or commitment. This was the central insight of Kierkegaard, Sartre and other existentialist philosophers. Pureland, as I understand it, is an existentialist Buddhism. It strips us of pretension until we stand spiritually naked facing the challenge to actually live and love as the beings that we are in a world such as this one. Buddha's wholehearted way is not about ending all passion, suffering and struggle - paying off one's karmic debt and saying goodbye to the world: if he had done that we should never have heard of him. Rather he went through the world banging a drum for vibrant aliveness, for love, for fellow feeling, for joy, and for the courage to rise above setbacks and difficulties. It is important to live. Buddha means awakened. The first thing is to wake up and become fully alive. When one does so one may make many mistakes, one may have joy and suffering, one might discover one is not such a nice person after all, one might laugh and cry more, one will find out a lot about life. When we let Buddha's light illumine our world it may be like turning over a stone - when the light falls on what was previously in shade all kinds of wiggly creature may dash about. But at least one is alive and as one examines that life one sees that in all its diversity it is really love and we can have faith in that.

On Sunday we shall be having a day retreat at Sukhavati in Finsbury Park (21 Sussex Way) called "Liberation, Passion and Spirituality" to practise together and discuss these ideas further.

::link to original, where you can leave comments

We have all heard "I think, therefore I am" but what matters is "I am, therefore I must do something". To do something is to commit oneself. Whatever one commits oneself to is an act of love of some kind. The object of one's love may be wholesome or not; the manner in which one acts one's love may be skilful or not; one's capacity of heart and mind may be big or small; but, whatever, love drives our life. Even the most negative seeming things are driven by love ultimately. Hitler loved an ideal of Aryanism. That same love could potentially have been put to much better use. He wanted to accomplish his idea of a perfect world. Every lover is trying to do so - just the ideas of what a perfect world is differ. We all seek our idea of the Pure Land.

Continue reading "getting to love" »

A chance meeting of art and science has led to a creative collaboration designed to raise the profile of an “invisible illness”.

Juliet Chenery-Robson decided to use photography to make people look at Myalgic Encephalopathy (or ME) in a different light when her 18-year-old daughter Emilia was diagnosed with the illness five years ago.

Despite affecting thousands of people in the UK, ME remains misunderstood by many health professionals, with many still believing it is “all in the mind”.

While looking for more subjects for her exhibition, Juliet was put in touch with Professor Julia Newton, a Clinical Professor at Newcastle University’s Institute of Ageing and Health, who is also a patron of charity ME North East.

Professor Newton’s team leads the way for chronic fatigue research in the UK and is one of the few places in the country focussing on the biological indicators behind illnesses such as ME.

In a letter to a constituent who lives in Sheffield, Liberal Democrat leader Nick Clegg MP criticises the NICE guidelines on ME/CFS and calls for the setting up of an independent scientific committee to oversee all ME research.

The recently elected party leader shows he is in listening mode – following The ME Association’s recent campaign asking members to write to their MPs backing calls for an adjournment debate on ME/CFS in the House of Commons.

The call for an independent scientific committee echoes one of the recommendations made in November 2006 by the all-party Group for Scientific Research into ME, which under Ian Gibson MP conducted a lengthy inquiry into the state of ME research in the UK.

Although John Bercow MP missed out in the ballot for an adjournment debate in November, The ME Association understands that he will try again soon.

In the letter, Mr Clegg wrote:

Thank you for your correspondence regarding some of the problems that are currently causing concerns for people with ME/CFS including inadequate research and the recent NICE guidelines on the subject.

Unfortunately, a ballot to secure an adjournment debate on these issues, scheduled for the week commencing November 19, was unsuccessful.

As I’m sure you are aware, one of the main obstacles to the adequate treatment of ME is the lack of knowledge and consensus about the disease. There are many theories as to the causes of the disease but no conclusive proof to fully support any of them. This is why it is vital that more research is done into the causes and progression of this difficult to diagnose condition.