'healing' does not mean 'cure''

As a Complementary Therapist one always has to be careful of using the word 'healing' in any context for fear of misleading a client and giving false hope. Therapists according to current rules and regulations are NOT healer's. I absolutely agree with this. It is a bold statement that if allowed to become a truth just might lead to a God complex in the wrong hands.

However that doesn't necessarily mean that a 'healing' doesn't take place when a client enters a therapeutic space with a therapist. I firmly believe that it is my clients that do the healing for themselves. The human body has the capacity to heal itself if we give it the time it needs and with assistance from both conventional and complementary medicine.

In the years I have been a therapist I have encountered people with the same disease on the same treatment, while one gets better, the other falls in to decline. It is clear under such circumstances that other factors are at play here.

Come and share our vision. Come and join us in creating a Pure Land.

Amida France is set in 30 acres of beautiful French countryside. It is in the heart of France in an area which you have

probably never heard of because it is off the main tourist routes. Beautiful and undiscovered.

Amida France is a place to unwind, to encounter nature, to heal, to find your creativity, to deepen your practice, to discover the rich spirtuality of Pureland Buddhism. It is a friendly place where there is often lively discussion over meals or shared time working on building or arts projects. It is also a place for  discovering silence in the woods and fields. 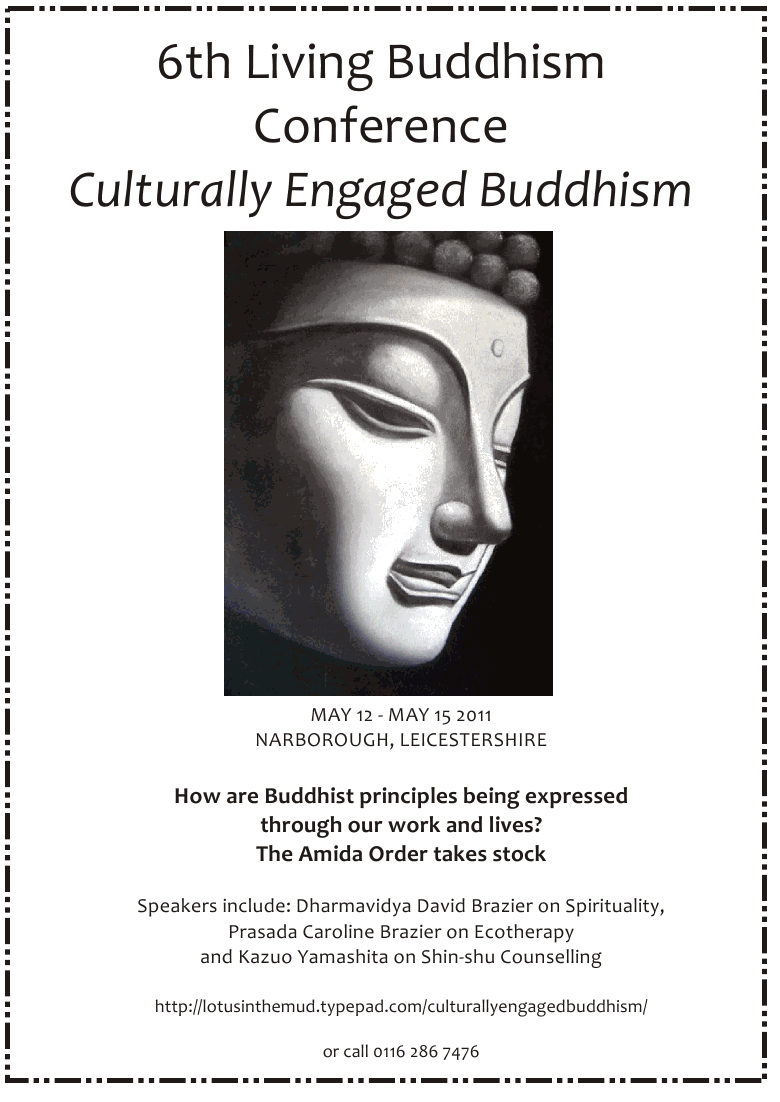 I've been asked what I put in it.....here are the ingredients though I can't say what the quantities are:

I mix up enough for a couple of weeks. To eat I add orange juice, stewed dates, figs and apple - or pear, depends what's in the veggie box (I stew enough for 4 or 5 days and keep in the fridge, heating up in a saucepan to put on the muesli), Greek yoghurt and ground flax seeds.

time to revive the alternative society?

Our world is changing. There is austerity. There are rising prices. There is anger. Where will it lead? What will people do? They may over-throw governments in the hope that new ones will do better - but the new ones will have the same problems as the old ones and less experience. They may persecute minorities; this is quite likely. There may be wars, though this is increasingly difficult in the contemporary world of weapons of mass destruction because there are no real winners any more. There may be civil disorder and even civil war is possible in some places. Governments are likely to retrench and extensive systems of social control such as have proliferated in recent decades are likely to weaken. This creates conditions favourable to new movements. Discontent can be turned negatively into hate and strife or it can be turned positively into new contruction and values.

In the nineteen fifties, sixties and early seventies there was the idea of the Alernative Society. This was an ideal of greater liberation and greater togetherness that took many forms. There were many associated sub-movements - beatnik poets, hippies, communes, etc - and various periodicals sprang up. It generated much popular music which celebrated the sense of hope. Some of the manifestions - the free love and the drug culture - now appear to have been aberrations, but they were all manifestations of a spirit of hope and freedom, both social and psychological.
At that time, knowledge of Buddhism was in its infancy here in the West. Buddhism was, in many ways, at that time, a sub-movement within the Alternative Society. I myself lived in a Buddhist commune. The population there was from several kinds of Buddhism. There was a sense that meditation achieved what drugs were supposed to achieve, only more effectively and enduringly.

Since then, Buddhism has become more institutionalised and is now in danger of stagnation, which will, I fear, be its fate unless it can indeed rediscover that spirit of liberation and become the focus of hope for young people. Most Buddhist groups in Europe at least now have aging congregations. A renewal is already needed and it needs to be a renewal that reanimates idealism about all aspects of human life. Buddhism is not just "a practice" or, even worse, "one's own practice", that isolates a person from the corrupt world. Buddhism is a light for the world itself and a light does not just illuminate the light-house.

There are two kinds of Buddhism. There is Pure-Self Buddhism and there is Pure-Land Buddhism. One can aim to become an alternative self or to be part of an alternative society - or both. If those practising pure-self have pure-land in view and those practising pure-land appreciate all approaches then there can be a movement that transcends narrow boundaries. The idea of Pure Land or Other Power is not limited to a couple of Japanese and Chinese denominations. It is a gospel of hope for everybody. There is no membership - just the opening of the heart to what is all around. Pure Land is liberation-in-relation. The time of hope is returning.

This, however, is not just a Buddhist movement. The age of the spirit may take on a myriad forms and associations. We should think of ourselves not as "the answer" but as a rich contribution. If we have a real sense of our own bombu position, then we can contribute to a renaissance of hope in society at large. The ideals of liberation and of the Alternative Society can be a beacon. When something is unleashed in the world there is no telling where it will end. We are entering such times.