the growth of buddhism in europe

Growth of Buddhism in Europe

Before the beginning of the twentieth century, the study of Buddhism was confined mainly to scholars and there was not much practice of the teachings. Later, this pattern began to change. A number of Europeans felt that merely reading about Buddhism was not enough, so they travelled to the East to acquire firsthand knowledge of the Buddhist practices and to experience the monastic life.

Continue reading "the growth of buddhism in europe" »

The fact is that we never know what is round the next corner. Surprise requires spirit. Whatever we encounter, we can meet it with fullness of spirit.

What's the new IZT logo all about?

It brings together the traditional Zen enso, or circle, and elements from the logo of Amida Trust (which IZT is part of).

The enso is an image that's become reasonably well known in the West, although perhaps its meaning is less known. It represents the ultimate trancendent reality.

The Amida Trust logo is a sunset: the sun and clouds. The sun here represents Amida, which can be considered that aspect of ultimate reality which comes to us, and which we can relate to.

The clouds in this image represent the kleshas. A klesha is a mental state of mind which clouds judgment (anxiety, fear, anger, jealousy, desire and so on) and prevents us from seeing Amida clearly. This is the ordinary human reality, there is something which is perfect in love and wisdom, but so much of the time it is hidden from us by clouds which rise from our karma.

The new IZT logo introduces this element of humaness to the perfect Zen enso. The two horizontal lines are like the clouds which obscure the bright light of the sun. :: link

To grow pearls there has to be some grit in the oyster. Each of us also has our gritty question. All too often, however, we devote our lives to ignoring rather than working on it. According to Zen, it is this ignoring (avidya) which keeps us in the realm of suffering (samsara), but it is the grit (dukkha) which gives us the opportunity to liberate ourselves.......it is this very dukkha which is our best friend. Dukkha shows us that we need to do something about ourselves and shows us where, when and how to do it. By working with our own grit, we become a 'true being', a true pearl. We can be greatly helped in this process by 'good friends' (kalyanamitra).

:: link to Institute for Zen Therapy

It's been a full and interesting week. Three evenings I gave talks to different groups within the sangha here on the topic "Que es Tomar Refugio en el Buda?" Each talk I spoke initially in Spanish and in the Wednesday talk I managed the whole thing in Espanol with help with an occasional word from my translator. Of course, when we got to the question and answer part at the end the translator came more fully into the picture. Nonetheless it felt very good to have managed a whole three quarter hour talk in Spanish - a first!

Then this Saturday morning Franca, Sumaya and I participated in the Zazenkai meeting which included a lengthy talk by Zen Master Celso Navarro. This time I managed to understand the whole talk apart from the jokes. When people break into more colloquial language one loses it. His talk was concerned with the universal nature of the Path of Awakening and I was very happy with the ecumenical flavour of his remarks.

"To take refuge is to enter into a relationship with what is beyond the ordinary that opens us to truth and love beyond our personal limited selves."

~ Dharmavidya David Brazier
(from a forthcoming book... watch this space!)

moon at the window - manu bazzano 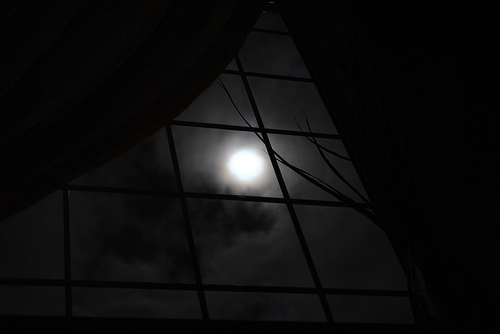 :: link
Zen – this three letter iconic word includes so many practices and philosophies, often in contradiction with one another. In its origin, it embodies an aspiration to revisit the unfettered teachings of the Dharma as bestowed by Shakyamuni who, unlike Kasyapa and (St) Paul, had no great inclination to big-time politics or to the founding of churches and parishes. Central to the teachings is the realization of the (ultimately) illusory nature the self, the cultivation of friendship, or sangha, the realization that life (ultimately) sucks, especially if one’s ambition is to grab as much as one can and/or hope to hoodwink death.

Within Zen one will find a theistic leaning – towards ‘big mind’ i.e. the identification of the self with the entire cosmos. Some would say that ‘big mind’ is a God substitute, or a shadow of God, a bit like saying “Fine, I’ll let go of the self, only if I can exchange it for a cosmic self”. This is bargain-Zen, insurance policy-Zen.

Within Zen one will also find a deconstructive approach, geared towards the experience of groundlessness or relativity or interdependence or emptiness (sunyata), a painstaking process of recognition of the non-substantiality of the self. Meister Eckhart called this ‘intimate poverty’. The Zen tradition calls it ‘grabbing an ordinary person’s nose and twisting it hard’. Or:

The thief left it behind
Moon at the window
(Ryōkan)

What this may awaken is a sense of deep perplexity when faced with the sheer vastness of the phenomenal world. After which one puts the kettle on... Yes, God is dead, but it’s not such a big deal. The shadows of God also vanished - all the assorted religious, psycho-social ideals, from enlightenment to universal solidarity – after which we can have tea with milk, one sugar please. This is not cynicism of course, but rather a form of profound scepticism.

:: continue reading on the Institute for Zen Therapy site

Manu Bazzano is part of the IZT team. You can visit his own website at: www.manubazzano.com.

My Zen teacher Kennett Roshi used to say that Zen and Pureland were two entrances to the same tunnel. The implication was that if you went in Zen you came out Pureland and vice versa. I studied under her and then later became Pureland. Now I'm interested in the point where they meet. If we make a quick comparison of the salient features of the two systems we get a chart something like this:

Zen and Pureland are both expressions of Mahayana Buddhism, both value the bodhisattva ideal, both value the teacher-disciple relationship, both are “practice schools” as distinct from “philosophical schools”. In Chinese Buddhism, Zen and Pureland are often practised together, though it is generally more a matter of Pureland practice within a Zen ethos. My own style is rather the other way around.

Zen means contemplation. Pureland schools have often practised contemplation. Shan Tao was perhaps the most eminent Pureland master in history and he was known for his contemplative practice. Zen, therefore, is not alien to Pureland. Similarly, chanting is not alien to Zen. Many of the benefits that come from one come equally well from the other. Some people think of Zen practice as hard and Pureland as easy, but our recent Ten Day Chanting Intensive was certainly tough and Zen also has an ideal of effortlessness. These observations show us that some of the supposedly sharp differences tend to melt away when one looks closer.

some thoughts about a quiet week and the 'pratimoksha'

'It’s been just over a week since I have posted anything on this blog. This is not by way of saying that I have been too busy to write; in fact there has been ample time. Rather it seems as though my world for the moment has become somewhat routine and I have lacked inspiration to put anything into words. In actual fact what tends to visit me during such times is a spirit of critical self questioning. This seems to constellate around the bigger questions: ‘what is it that I am doing here’ as much as it does the smaller everyday ones that face me: ‘shall I visit this person, and how will that help what Amida is doing here’. Of course both ends are connected and influenced by my thinking about what constitutes living a Buddhist life. Encountering a culture that for the large part doesn’t understand me linguistically, culturally or spiritually – by which I mean where I fit into the religious jigsaw puzzle – is a daily challenge. If I can get a handle on at least one of these three dimensions then it immediately provides the satisfaction that comes from the sense of being engaged. Yet I find that such moments are just that, fragments that nourish me for sure but not in a way that stops me from, first feeling hungry and then, sometimes empty....' ::continue reading