a visit to durham to see the lindisfarne gospels

I was delighted and honoured to accept the invitation from the Catholic Hexham Diocesan Department for Interreligious Relations to be the Buddhist representative on a visit to Durham last Wednesday (14th August) to see the stunningly beautiful 700 year old Lindisfarne Gospels.

This is one of the world’s most precious books and is on loan to Durham from the British Library.

In addition to the Lindisfarne Gospels, the exhibition includes the Cuthbert Gospel and Cuthbert’s own treasures: a sapphire ring, a portable altar, his jeweled cross and fragments of his vestments, plus a large selection of Northumbrian Gospel books, stone sculptures, viking swords and precious Anglo-Saxon treasures including gold and jewelled pieces from the Staffordshire Horde. 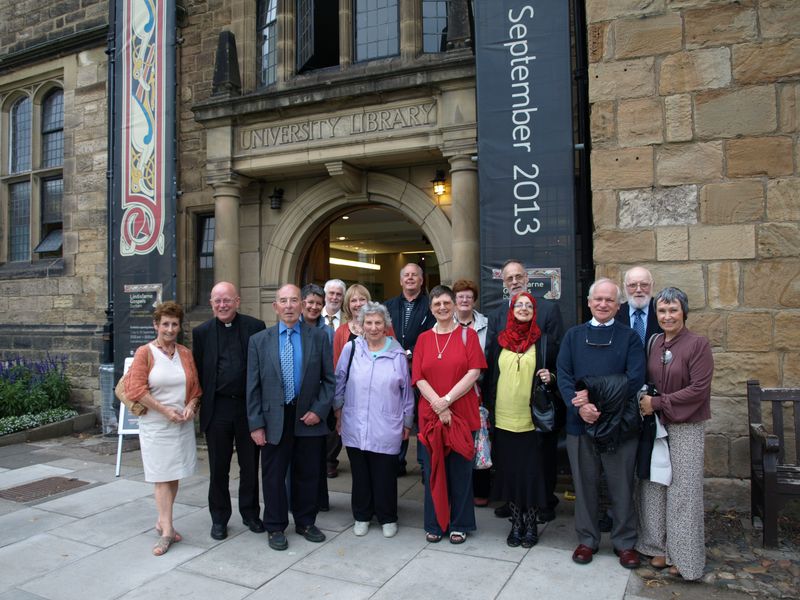 A visit with a difference – the Lindisfarne Gospels

Thousands have welcomed the Gospel book to the north-east by going to visit this priceless treasure in its temporary home on Palace Green in Durham. Here’s some news about a visit with a difference.

On Wednesday 14th August members the Diocesan Department for Interreligious Relations visited the exhibition with friends from other faiths.  Catholic members of the Department had sent out invitations to other faith groups in the north-east and were joined by people from the Jewish, Muslim and Buddhist communities. Head of the Department, Anne Shaw, says ‘The Lindisfarne Gospels have great significance for everyone in the north-east; they remind us that people with Christian faith have been here for many centuries; they are also a magnificent work of art. In promoting dialogue with people of other faiths we hope to learn from one another’s traditions and this seemed another way of letting the others see something that we value.’

Anyone who has seen the Gospels will know that only a few people are allowed in each room at a time. Understandable, as the temperature has to be kept constant, but it meant that our group had to split. Catholics were able to look and marvel at the book side by side with individuals from the other faiths and this turned out to be fruitful, giving us a real opportunity for one-to-one conversations about what we were seeing.

The Gospels have to be treated with great care - we were told that the pages we saw (the Cannon tables) were to be turned that evening - so will not be seen for another 200 years.