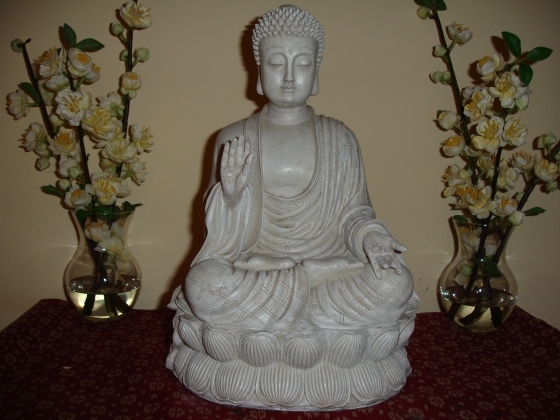 Hello all.
How lovely to meet you last weekend - such a tender retreat!

So - the Amida Scotland news is that there is no news - or, at least, no concrete news - just yet. However there will be more Amida Pureland Buddhist activity in Scotland in 2015.

There'll be a small temple in my new home in Perth similar to the one I ran in Newcastle for 14 years - a 'home temple', which is quite traditional in Pureland Buddhism. I'll teach and offer opportunities for more Pureland practice - chanting, walking, music, some dancing, some art events - in a warm and welcoming space so we can share and support each other in our spiritual journeys. I also hope to teach in Edinburgh sometimes. Other members of the Amida sanghas around the UK, and maybe further afield, will visit from time to time and there's a whisper of Dharmavidya visiting Scotland again, maybe in 2016.
So I look forward to seeing you again
in the not too distant future.

where you can link with others around the world and find special interest groups, blog posts and discussions, past 'Whispers from the Bamboo Grove' occasional newsletters and 'Running Tide', the Amida magazine.

Sign up :: here
to receive the
'Whispers from the Bamboo Grove'
newsletter, which comes out, usually, every 1 to 3 months.
You'll find past newsletters :: here

Event: Pilgrimage: "In the Footsteps of the Buddha"
Delhi, Nepal
March 15 - 30, 2015
:: details here
:: more information on the pilgrimage website here

You can find out about Dharmavidya's centre in France
Eleusis
:: here
and you can join the Eleusis network
:: here

This is :: a link to to the
Zen Therapy International (ITZI)
website

Everything in life depends upon causes and conditions. Set up the right conditions and the right things happen. Buddhism teaches the right conditions for spiritual growth. A person is what they do. If a person acts with right intention they transform spiritual dangers into opportunities. Buddha taught that times of change (birth, illness, loss, gain, conjunction, separation, and encounter) are occasions of danger that can also be opportunity. However, a person is seldom able to take hold of such opportunity by their will-power alone. Will-power alone tends to be self-defeating because even when it achieves something it gives rise to pride over and attachment to those results. There is a more effective and subtle path to wholesome transformation via the deeper mind and the most effective way of activating such change is to chant.

Actually, the Buddhas are always calling to us. Amida Buddha is calling each of us. Amida’s light penetrates the deepest part of us, but unless we also call we remain closed. Once we begin a practice of chanting, however, a process of transformation begins. Something subtle starts to happen. Each person who chants becomes a vehicle for Amida’s compassionate work in the world, whether they are aware of it or not. Mostly, in fact, one is not aware of Amida’s action until one looks back over a period of time and sees that one’s life has changed. One has become more positive and more effective in many ways and obstacles that used to seem big now seem manageable or small. We do not chant in order to change. We do not chant in order to help others. We chant in order to call the most loving presence into our life and to make ourselves available to it, but the effect is that we do change and others are benefited.

Jnanamati, novice amitarya (monk) with the Amida Order, has arrived in Delhi. He paints a vivid picture (as befits an artist):

I have slept for a long time overnight and although waking at around 5.30 a.m. roused by Prakashs’ departure for work, and from then on conscious of the noises of the house and surrounding area as things come to life, I drift in and out of sleep until around 9.30. I am plagued by a sense of guilt struggling with my need to remain hidden in the warm cocoon of my bed. Eventually I am pulled from this state by Prakashs’ brother who needs to get something from the room I am sleeping in. He offers to get tea which I accept and then the motivation to rise comes. In ten minutes I have some hot tea, a couple of oily parathas and a plate of digestive biscuits. The mix fails to revive me as one might expect and I mark how I am somewhat low in spirit today.

Ah, but that picture shows so, so much. It shows everything!

That’s us. You, me, everyone. That fuzzy blob on the left? That’s Earth. The one on the right: the Moon.

In this one simple picture, you can see everywhere humans have ever been; hundreds of thousands of years spent on Earth, and a few brief days on the Moon. And this picture was taken from much farther than anyone has ever traveled.

off to amida france for the amida order intensive retreat

Tomorrow morning (Wednesday) I'll be driving down to London with Kuvalaya. We'll stay at Sukhavati. Then we'll set off in Padma's car, with Modgala, on Friday morning, via the ferry and off to Amida France, taking a couple of days so the journey is part of the fun. Then, a week with friends and an opportunity to meet members of the team that I only know via skype, phone and email - so looking forward to this

Gosh, it's a long time since I was there - the summer of 2005, the summer of the London bombings - I was overwhelmed by text messages when I was finally able to get a signal on my mobile, to tell me that my son Simon was safe. Safe from what? I hadn't heard the news, so rushed to the landline for clarification. (Like many Londoners, Simon has a history of being nearby bombings - IRA, Al Qaeda. London commuters are used to the Underground being shut because of bomb warnings. I lived in London through the 70s, when we were all on high alert and no journey was undertaken without vigilance.)

It was also the year of the death of the sister of one of my Order, so she and I travelled to Ottawa together. It seemed so long ago, but casting my mind to those days, I could almost be back there.

So much has happened in the intervening years, both for me and also Amida France - I wonder what changes I'll see when I get there!

I arrived yesterday and will be here until the end of the month lecturing on Buddhist psychology and giving Dharma teachings. You can follow my progress on my weblog . My hotel is just across from Chogye Sa, which happily means that it is easy for me to join the devotions there.

the remainder of dharmavidya and prasadas' trip to north america

::link to Friends of Amida

obama 'to act over car emissions'

US President Barack Obama is expected to allow states to set their own stricter standards for vehicle exhaust emissions, overturning a Bush administration decision which favoured a national standard for vehicle pollution.

saving gas (or petrol, as we brits call it)

Save Gas, Save Money: 66 Ways To Spend Less On Gasoline:

While the rising cost of oil has the price of gasoline skyrocketing faster than global warming is melting glaciers, people everywhere are preparing for cross-country road trips to Grand Canyon National Park and summer camps in Maine. We can't really argue with that innate desire to get closer to nature and out on the open road, and whether you're a die-hard cyclist or a still driving an SUV, chances are you plan to get in a car to go somewhere this summer. So whether you're packing up the Prius for some close-to-home camping, towing the boat to far-away shores, or merely fighting the crosstown traffic, these money- and gas-saving tips are designed to help you squeeze every last bit of power out of that precious petrol--and cause fewer CO2 emissions, too. It's a comprehensive list--several tasks should be done before even starting your car; others require minor adjustments to your driving style. All of them aim to help you drive a little greener.

Rain and delays set for weekend

Busy roads, disruption on the railways and wet and cold weather for some are predicted for the Bank Holiday weekend.