the tree of life sangha

in mindfulness and gratitude, we care for each other, mother earth and all living things 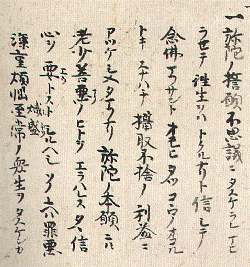 This work contains the sayings of Shinran (1173-1263), the founder of Jodo Shinshu or Shin Buddhism, which claims the largest following in Japanese Buddhism. Compiled several decades after his death by a disciple named Yui-en, this work consists of 18 sections. The first ten sections are the words of Shinran as remembered by Yui-en, and the next eight, preceded by a special preface, contains points of controversy current among the followers of Shinran. The prologue and epilogue to the 18 sections were written by Yui-en about whom little is known historically.

The Tannisho is one of the most widely read works in Japanese Buddhism, known not only as a religious but literary classic. It is impossible to translate such a work into English adequately and fully, but I have attempted to transmit some sense of its flowing style, religious content, and spiritual flavor. Among those who have guided me in my enterprise, I should like to gratefully acknowledge the comments and suggestions offered by two late teachers, Yoshifumi Ueda and Masao Hanada, whose words remain a constant source of inspiration.

In reflecting upon my foolish thoughts and thinking of the past and present, I deeply regret that there are views deviating from the true entrusting (shinjin) which was taught orally by our late master, and I fear that doubts and confusions